Over the many years we have trialled many ways to print cafe barrier banners on heavy duty canvas material.  We selected material that was supplied by a company called Dickson Constant. The canvas material we tested for all processes and was part of the “Orchestra range”. The elements we were looking for were crispness of image (COI), UV sustainability (UVS), depth of colour (DOC), cost (C), life span (LS), Image Transparancy (IT) and the impact the process has on the environment (IOE).

Initially we looked at screen printing.  Although the cafe barrier print turned out well, we thought that the edges were not quite crisp enough (This was more likely down to the supplier than the process).  There was also a slight transparency to the print.  If a client wanted a white logo on on a red canvas banner, the logo would have a very slight pink tint to it. The other disadvantage was that for every initial order that was placed with us, there was an additional cost for the screen.

If a client wanted more than one colour on their cafe barrier, they would have to pay for additional screens.  So, as an example, if a clients’ logo was three colours deep, we would have to charge them an extra £210.00. (£70.00 per screen) before we even started.  However, this was a one off charge and should the client want more banners in the future with the same artwork, the screens were already in stock with our supplier. However, if the client wanted to change his message or logo, another £70.00 would be incurred for each colour.

The screen printing process effectively works by laying a stencil on the material and repeatedly passing the various paint colours over the material until the image is finished.  For simplification purposes we have made it sound easy.  But, there is a lot more to it such as exposing the screens to UV, separating the colours on the artwork and switching the screens for each colour.  It is a laborious process and it should be noted that the artwork supplied must be precise. We felt that it was just too expensive for  small  clients.

We rated this process as:

We looked at printing directly on the canvas using a flat bed printer.  Initially we were looking at a white print on a navy background.  The first obstacle we found was that at the time hardly any printers printed in white.  Twelve years ago, direct printing was very expensive and the yield was pretty poor.

A similar problem to screen printing was seen.  The printer head would pass over the canvas and print a white logo. As the print was fairly weak on the first pass, the background colour of canvas would be seen through the printed logo.  Therefore, it would be necessary to print the logo again using a second pass.  However.  Any movement of the canvas banner material would result in the print not lining up consistently and it would result in the first pass and second pass overlapping.

After extensive trials with a large UK  printing company. We received feedback from clients confirming our thoughts that direct printing was too expensive and not consistent enough. For every successful print we managed to produce, we found we had to use three times the amount of canvas. We shelved the idea.

We looked further at applications of the canvas material and found that a large proportion was used on Yachts.  After extensive investigation we discovered that there were actually people that were still using old school sign writers to hand paint the logo onto the canvas background.  Some trial banners were produced and initially, we could not fault the finish.  If the sign writer was good, the logo would turn out crisp, and no show through would be seen.

Customer feed back was good and we decided that hand painting the logo, although it seemed like we were taking a step back in time, was the correct method to use.

The problem we found was that:

I have nothing but admiration for old school sign writers and I do hope that technology does not completely replace them.  However, without being ageist, I did find that there are very few young sign writers being trained.  The current crop of sign writers seem to be the older generation.

The final process we examined was heat pressing  vinyl transfers on to the canvas.  The image was excellent, although we felt that if the image being transferred is too big, the amount of vinyl used would make the banner resemble a PVC banner.

Customer feed back was very good.

The problems we identified were:

The heat presses supplied in the UK were too small. The maximum we could source was 400 x 600mm at the time. However, after much research we finally sourced a large heat press (1800 x 1100) in the U.S.

Further investment was required in a digital plotter and ECO friendly solvent digital printer.  We also had to source specialised software.

How the Heat Transfer Process Works.

Like heat transferring an image to a T shirt or mug, our heat transfer process works the same way, but on a much bigger scale.

We’ll start with the construction of the banners: 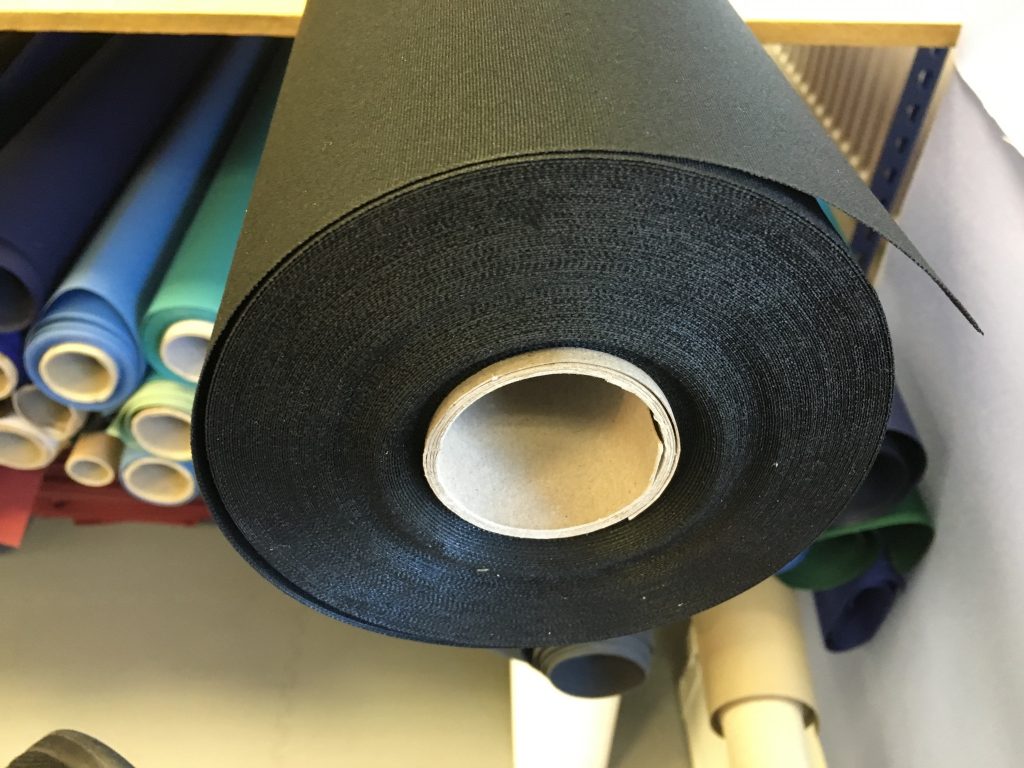 1. We receive the canvas for our cafe banners on a 50 metre roll. 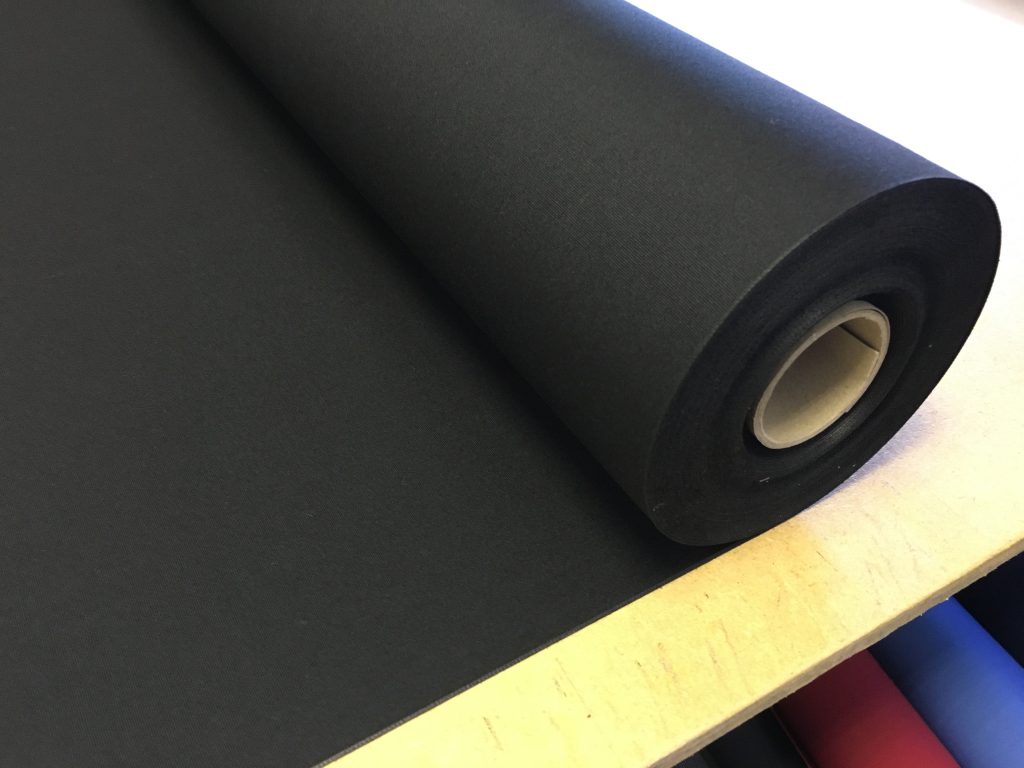 2. The Canvas material is unrolled. 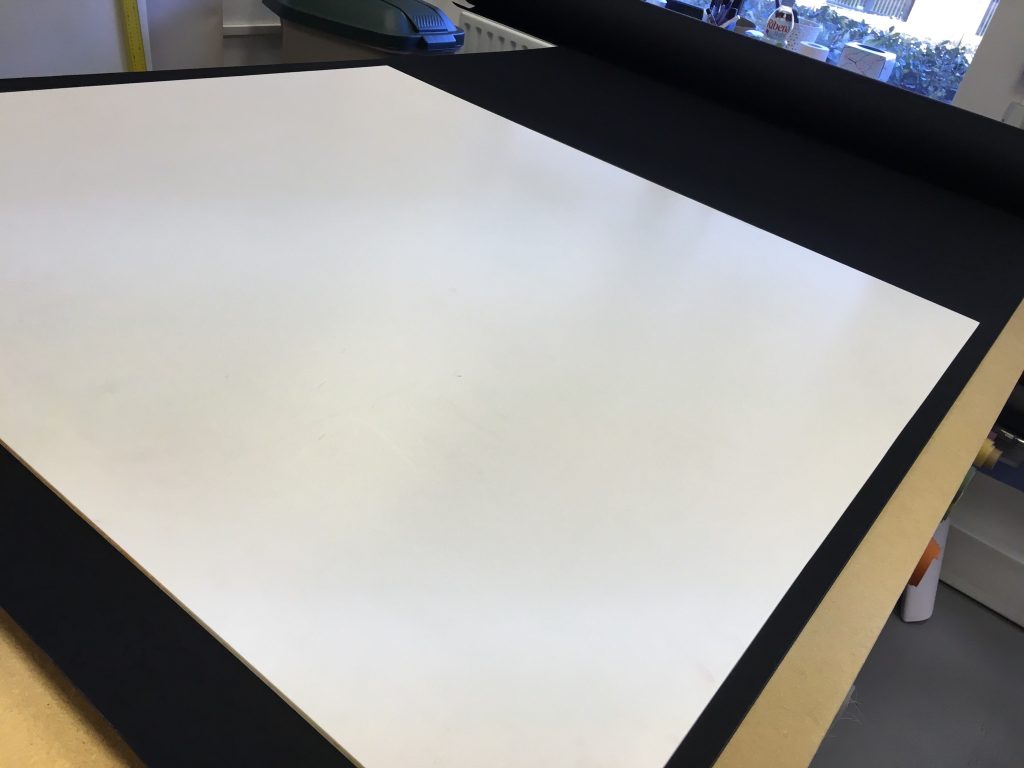 3. A template is placed over the canvas defining the clients required size. The cutting lines are then marked using chalk. 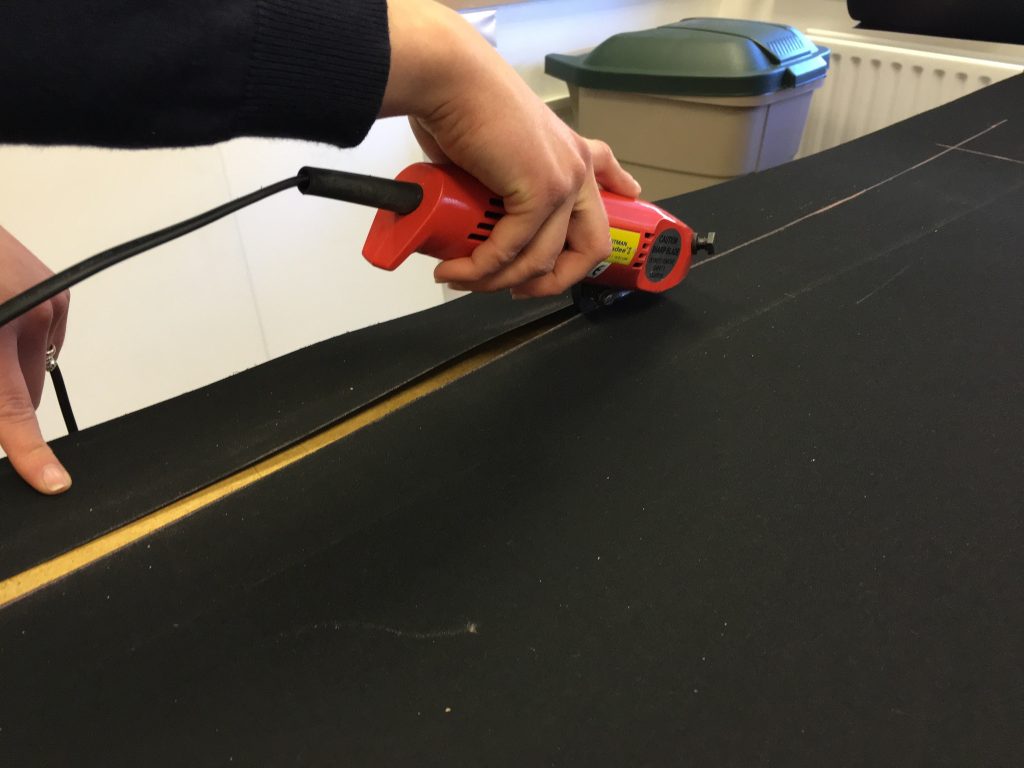 4. Using a rotary blade, the cafe banner is then carefully cut out. 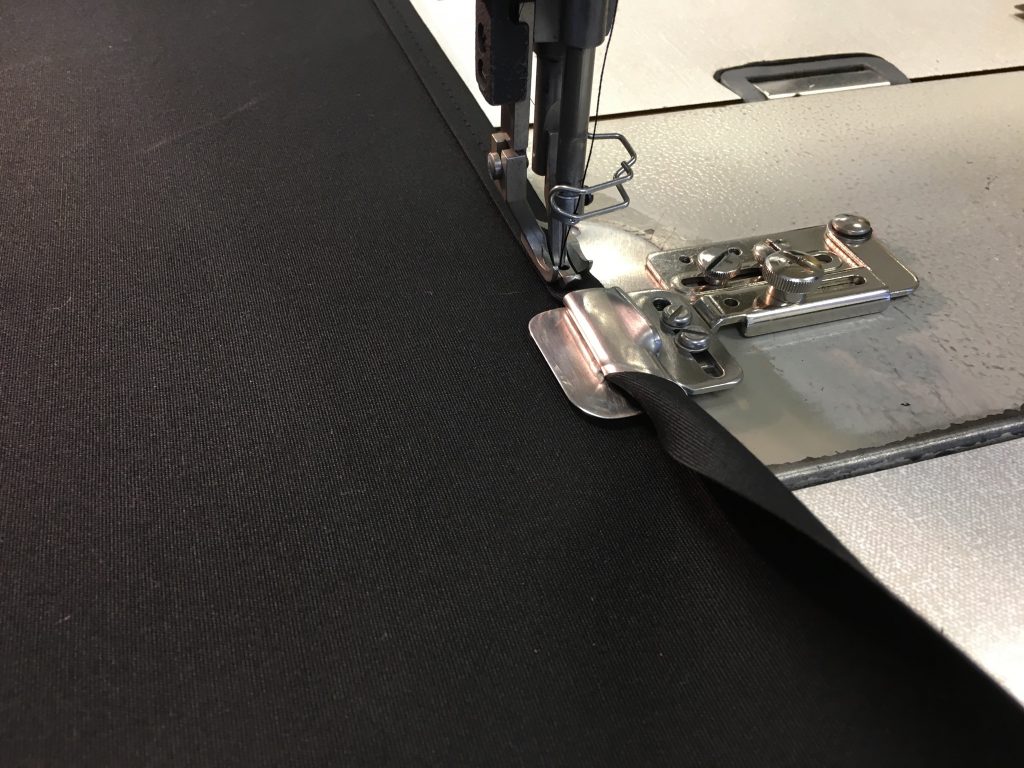 5. With a triple fold, the side hems are then sewn. To assist the seamstress, tools have been developed to automatically fold the canvas. 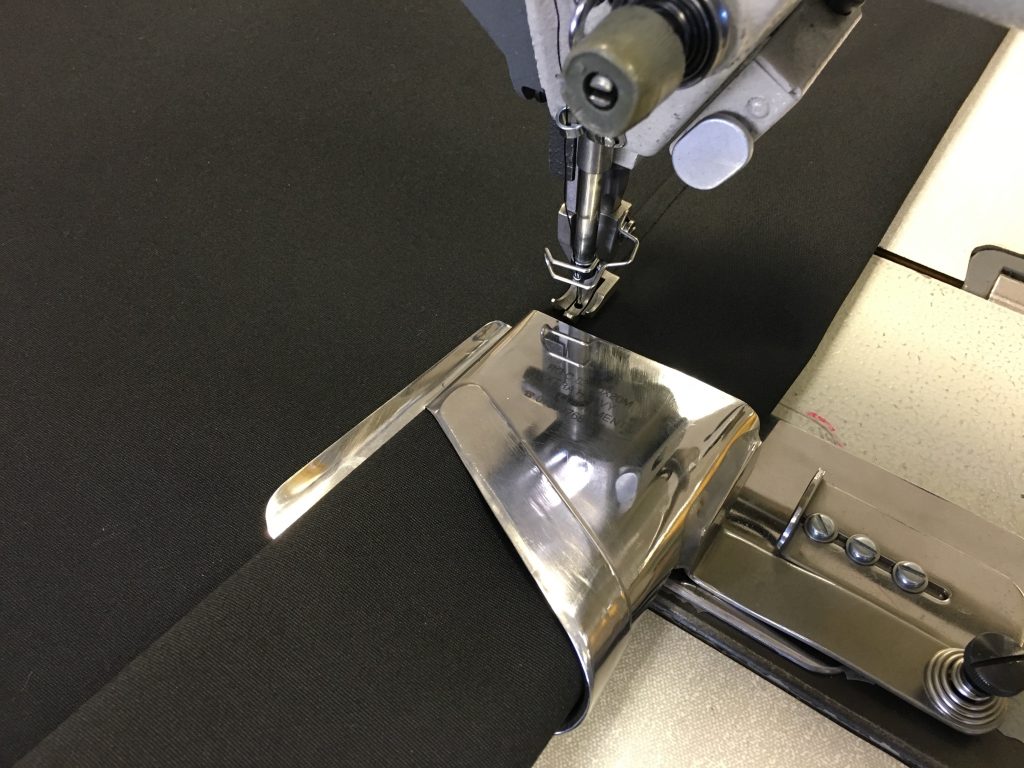 6. A second tool is then utilised to create the cafe banner’s top and bottom hems.  This will be where the cross beams are loaded through. 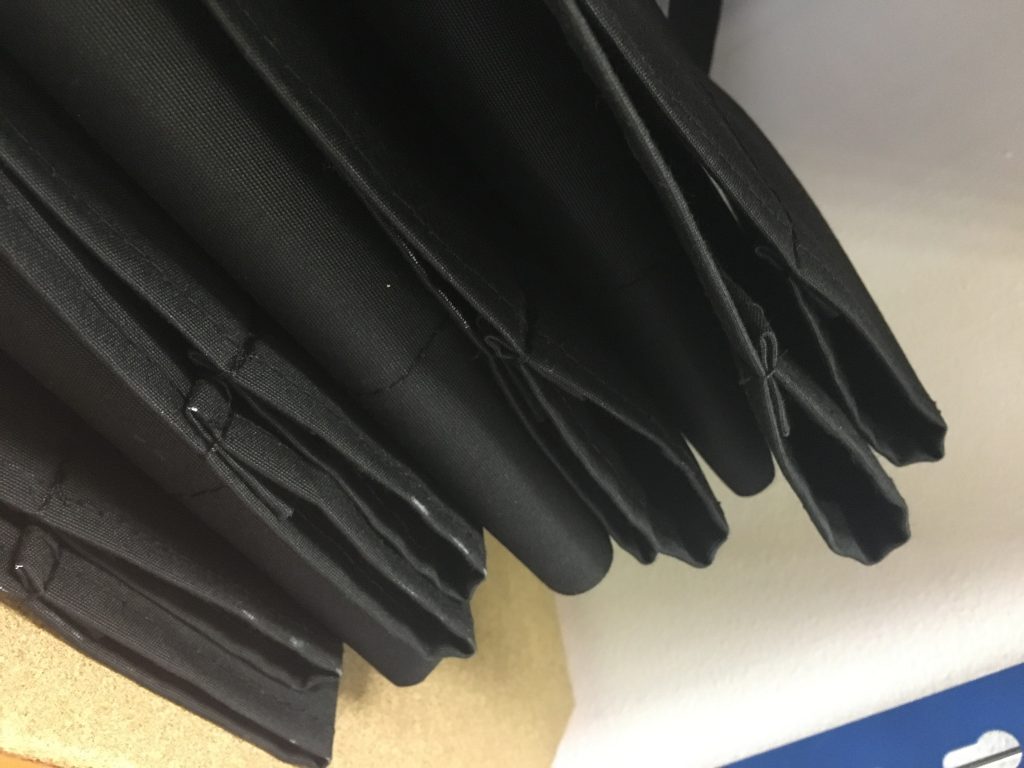 7. The plain cafe banners are then individually soft brushed, packaged and stacked awaiting the printing process. 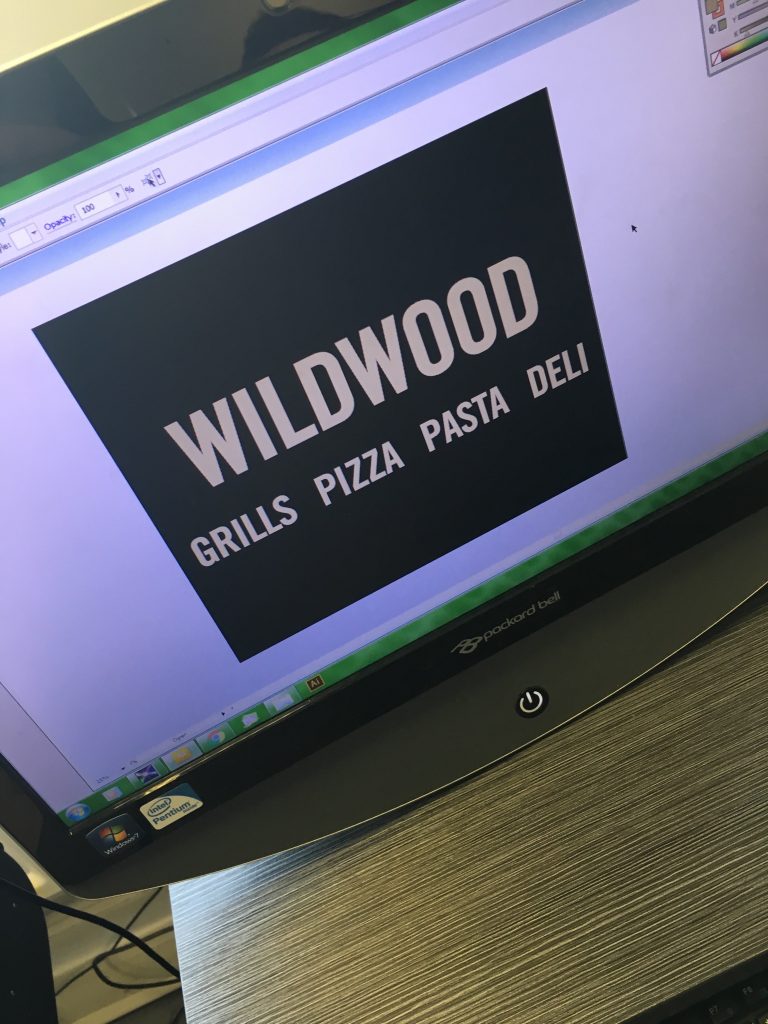 8. The artwork is supplied from the client. It is loaded on to the s software and any slight amendments are made if necessary.  The client is advised of any amendment. 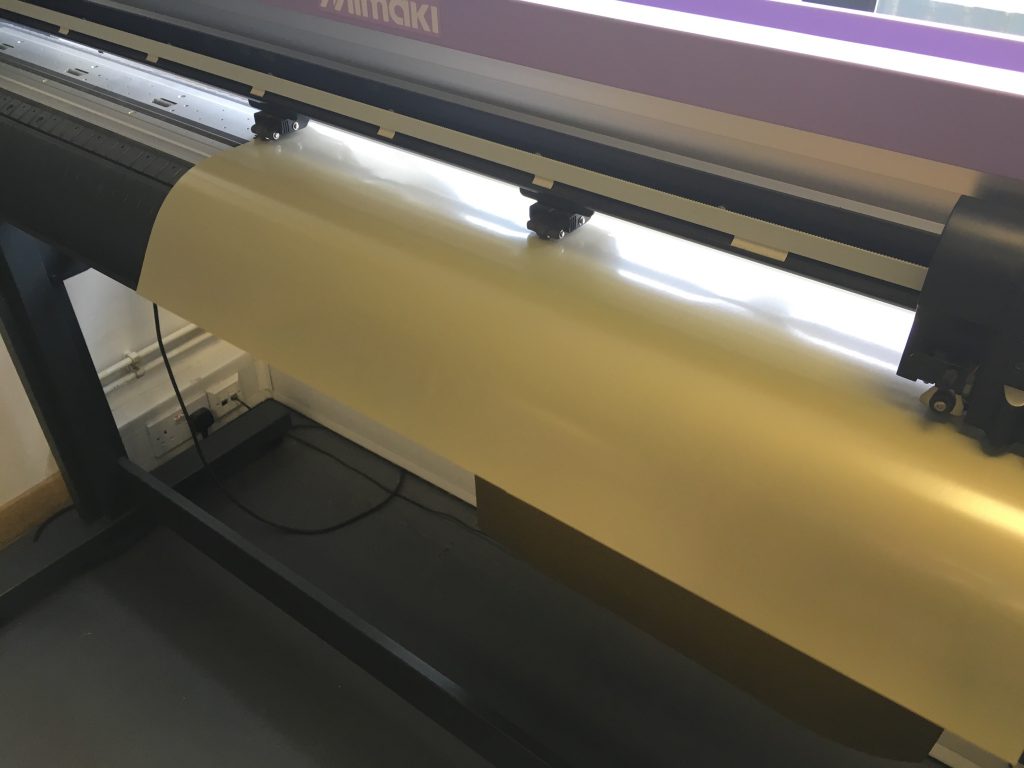 9. Once the studio is happy with the scaled, final cafe barrier design and the colour has been loaded on to the plotter, the vinyl is ready to be plotted. The printer is started. 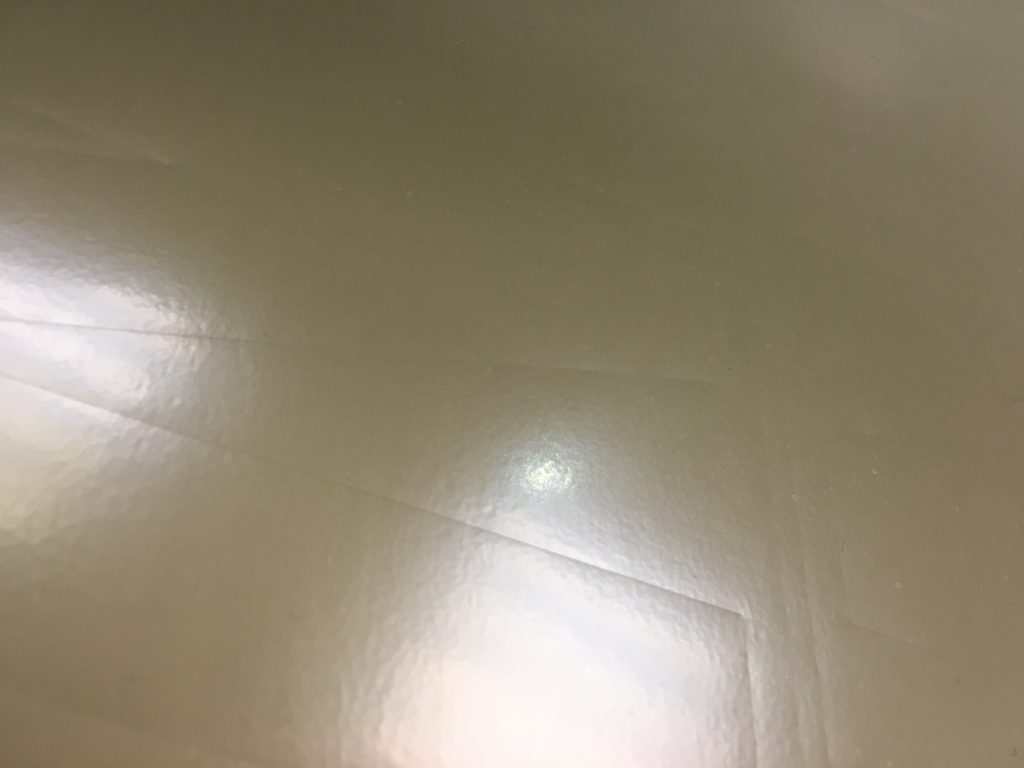 10. After a short while, the vinyl is ready and removed from the printer or plotter. Faint lines can be seen determining the cut lines and the pattern that has been produced.

11. Experienced “pickers” then go to work. This is where the waste vinyl is removed from the printed/plotted area. Specialised tools assist the pickers. 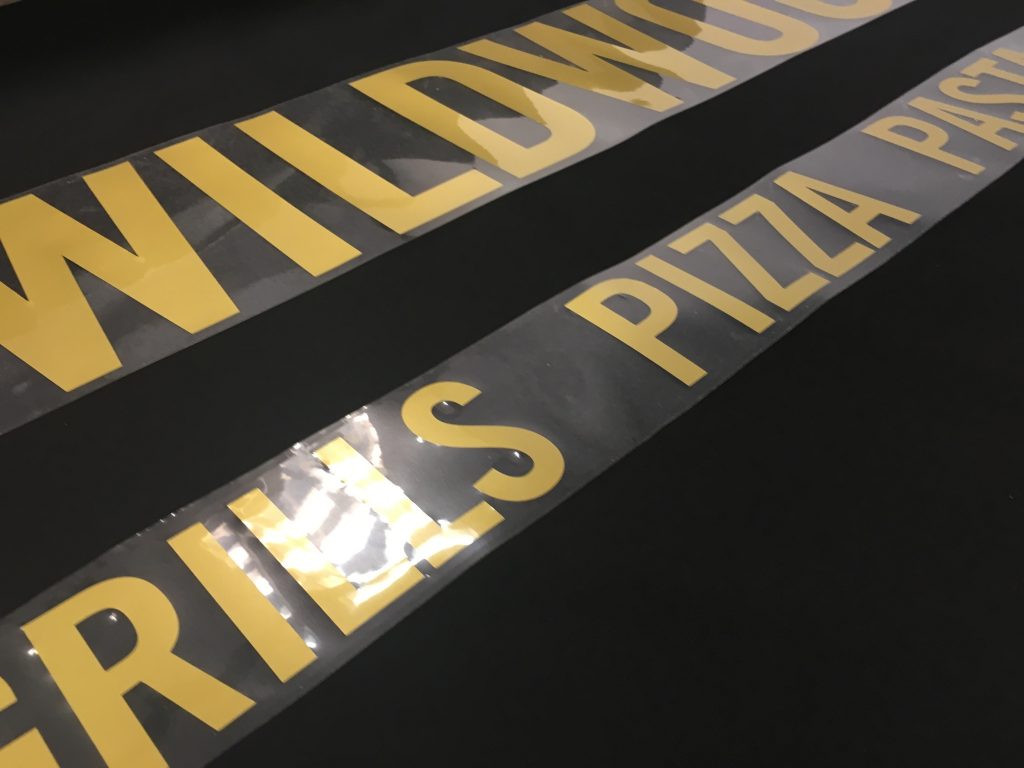 12. The printed vinyl is then placed on to the finished banner in its approximate position. 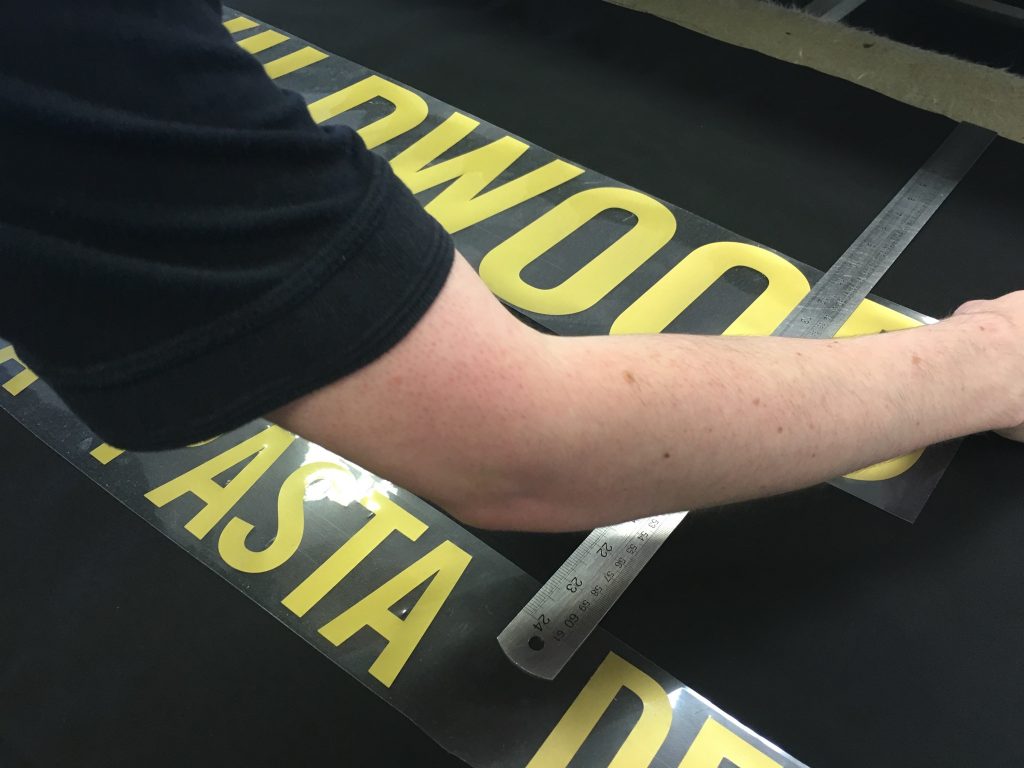 13. The position on the cafe barrier is the confirmed. This is usually with the assistance of a simple steel rule. 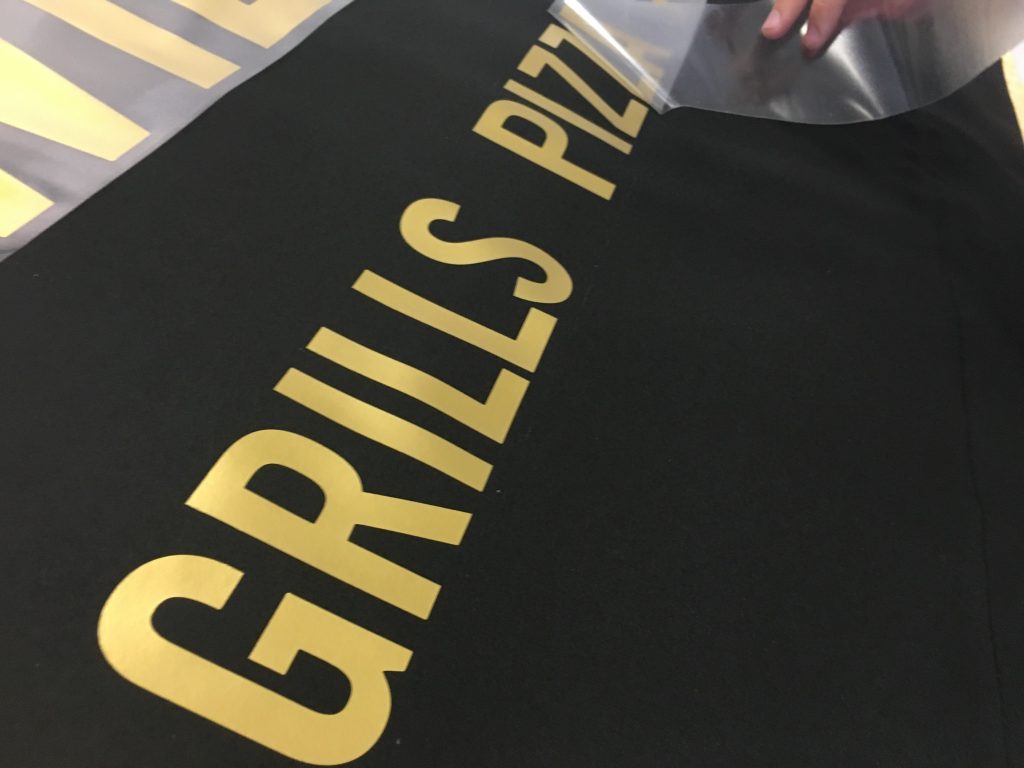 14. The cafe barrier banner is then pressed and the vinyl backing is gently removed. If any errors are noticed at this point, it is too late. 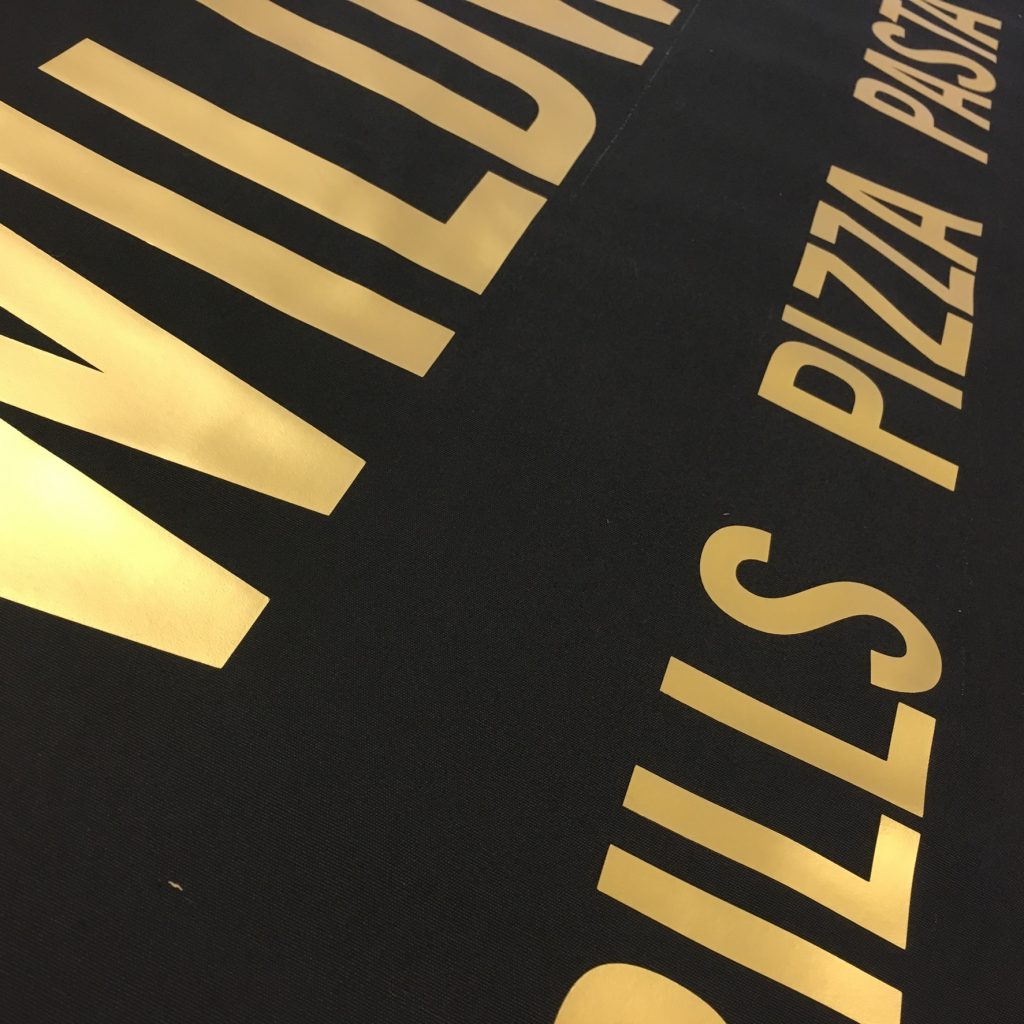 15. The finished Cafe Barrier banner is then re-pressed and allowed to cool.

If the client has ordered Cafe Barriers or Cross Beams, they will be placed on to a pallet and the finished banners added to them.  The weights and dimensions are measured and the consignment booked on to a courier list.

We have used a gold vinyl design on the cafe banners for this example for two reasons:

a) It just happened to be the next order due.

b) Gold is generally a difficult colour to print. 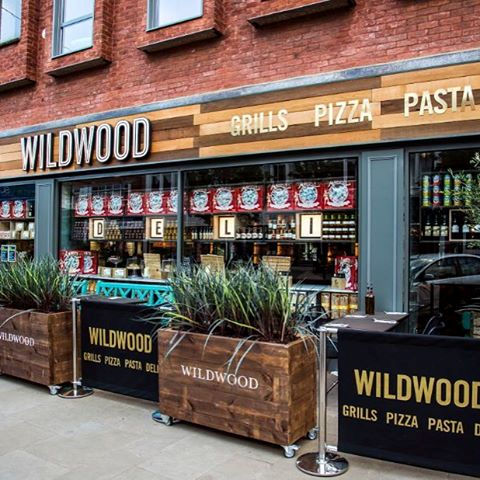 The Cafe Barrier Banners are then supplied to the client!

For more information about our products or processes, please see www.displayers.co.uk.